Activating the Sources of Economic Growth

Commemorating the 22 anniversary of its foundation, Riinvest Institute organized the fourth international conference “Activating the Sources of Economic Growth: Tackling the Challenges of Re (industrialization) in Kosovo.” The main objective of this conference was to gather decision makers and experts and discuss fundamental economic issues Kosovo faces.

The conference was opened by Mr. Alban Hashani – research director at Riinvest Institute. On his opening remarks, Mr. Hashani thanked the participants and Riinvest’s associates. Mr. Hashani declared that he hopes that the discussions and recommendations that will come out of this conference, are transferable and can be used from the government which is expected to come out from the upcoming elections. 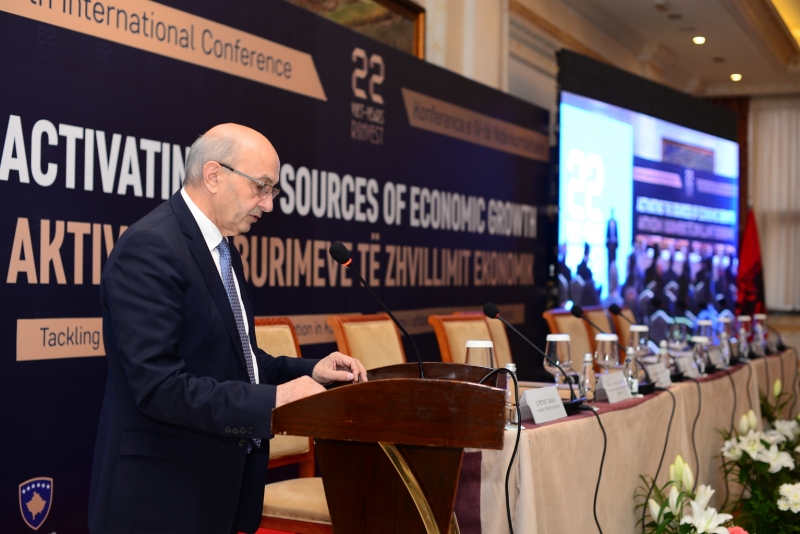 Meanwhile, Mr. Isa Mustafa – Caretaker Prime Minister of Kosovo in his speech mentioned the importance that Riinvest Institute had for the country during its 22 years of existence. According to him, Riinvest Institute has been a very important asset for the country’s economy, gathering around experts of macroeconomic policies, and offering recommendation policies constantly. Always according to Mr. Mustafa, Kosovo’s government during the last two years of its governance has cooperated with Riinvest Institute, always in the service of its citizens.

In this conference, Riinvest Institute presented two of its latest studies: “Business Climate in Kosovo 2016” and “Macroeconomic Bulletin 1/2017”, the latter published in a joint cooperation with the Ministry of Finance. 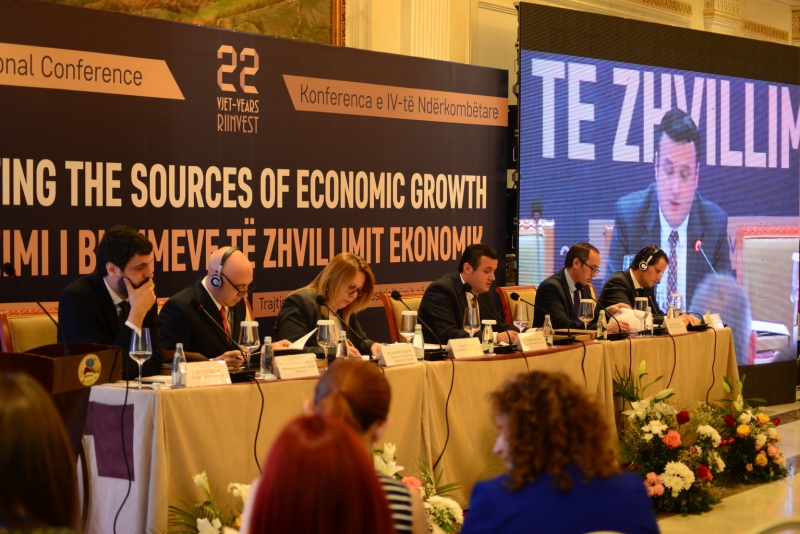 “Macroeconomic Bulletin 1/2017”, is a study that analyzes and presents the macroeconomic situation of the country, and is conducted in a joint cooperation between Riinvest Institute and the Ministry of Finance, and which is published on quarterly basis. The findings from the first edition of the study report were presented by Mr. Alban Hashani, Research Director at Riinvest Institute. According to the findings presented by Mr. Hashani, Kosovo has a stable budgetary performance, where overall income marked an increase of 7.3% when compared with the same period of the preceding year. Always according to Hashani, the banking sector marked an improve, where loan interest rates dropped in the fourth quarter of 2016, from 7.27% to 7.25%; while concerning the loan interest rates on deposits, Kosovo has the lowest rate when compared with regional countries. According to Mr. Hashani, the central focus of government’s policies should be to create conditions for accelerated economic growth. Regarding the inflation, Mr. Hashani declared that the prices have increased for 1.6%, in the first quarter of this year, while the main concerns remain in Kosovo’s trade balance, with a high trade deficit of 533 million Euros. The study “Business Climate in Kosovo 2016”, was presented by Mr. Visar Vokrri, researcher at Riinvest Institute, and at the same time one of the authors of the study report. Initially, Mr. Vokrri discussed the methodology of the study, where according to him, 600 small and medium enterprises were surveyed. Refering the findings from the study report, Mr. Vokrri declared that compared with the previous year, the barriers to doing business are in decline. Always according to him, a considerable number of businesses in Kosovo are not aware about the importance of tax payments. Meanwhile, regarding the participation of women in the private sector, the percentage of women has marked an increase from 22% in 2011, to 27% in 2016. 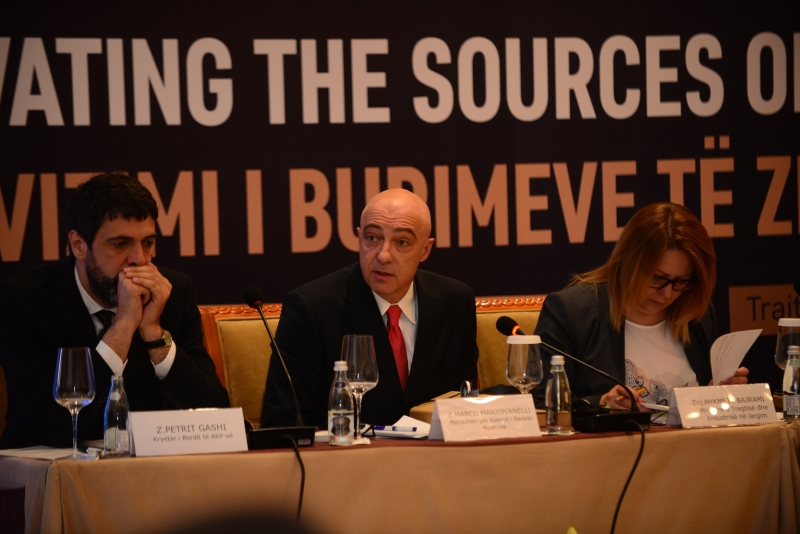 Mr. Marco Mantovanelli, World Bank Country manager for Kosovo, discussed some of the findings of the study reports. According to him, in order to have economic growth, there should be an increase in domestic production and international competitiveness. Mr. Mantovanelli, stressed out economic limitations, where according to him foreign direct investments and remittances, fuel the consumption in Kosovo, but are met by import – therefore minimizing the economy’s capacity to produce.

Meanwhile, the Resident Representative of International Monetary Fund, Mr. Ruud Vermeulen discussed on the dynamics of economic development and Kosovo’s economy vulnerability through economic crises. According to him, remittances are a bless and a curse at the same time, due to their power to finance consumption and unsustainable growth that they support. According to him, the level of unemployment in Kosovo, is at unacceptable levels. 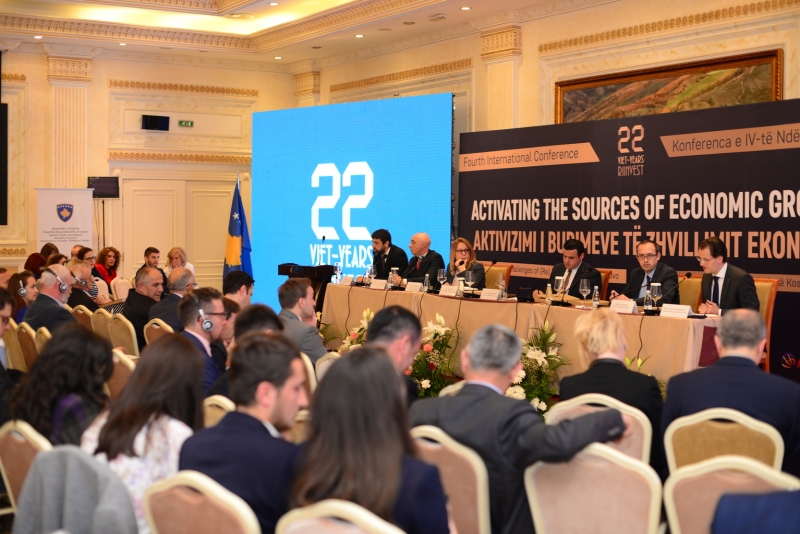 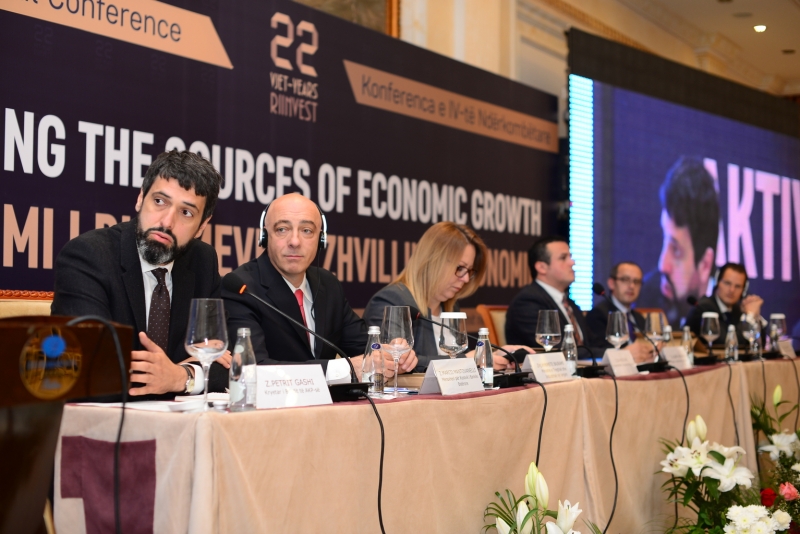 The first part of the sesion was concluded by Mr. Petrit Gashi Chairman and Director of Privatization Agency of Kosovo. According to Mr. Gashi, production capacities of the country should be increased in order to increase the benefits of the Stabilization and Association Agreement. 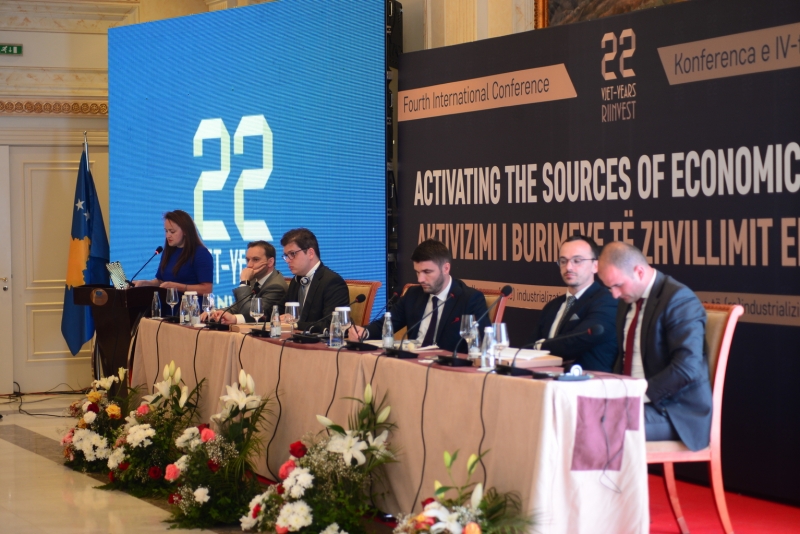 Meanwhile in the second session of the conference, local and international authors presented academic papers on the same topic. After the presentation and discussion of the papers, Mr. Visar Vokrri thanked everyone for their contribution, and closed the conference.