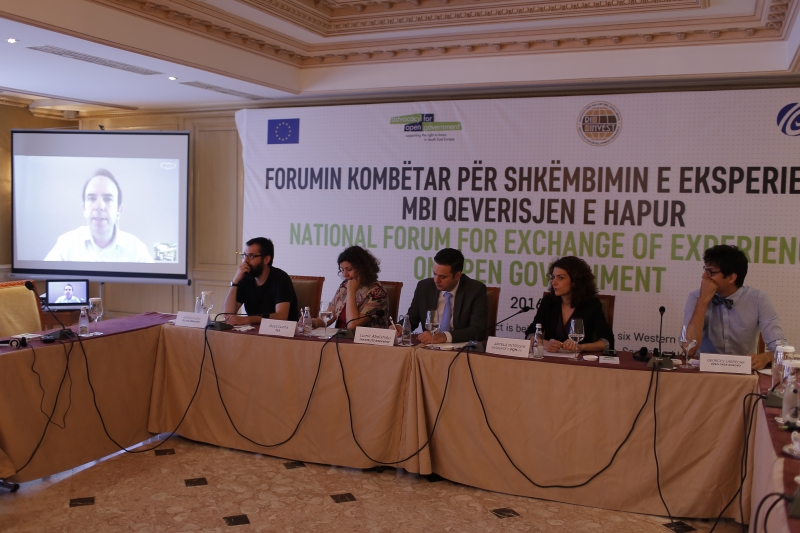 Exchange of experiences on open governance

Riinvest Institute, in cooperation with ‘Kosovo Foundation for Open Society – KFOS’, organized the roundtable discussion “National Forum for Exchange of Experiences on Open Government”, with the objective of encouraging the Government of Kosovo and the governments of neighboring countries, to become more transparent, accountable, innovative, and to encourage citizens participation in drafting the policies.

The forum was announced open by Lumir Abdixhiku, executive director at Riinvest Institute, who did a summary of the work conducted in the implementation of this project, mentioning as a very strong point, the increase of the level of cooperation between regional countries to solve the joint problems through a transparent governance. 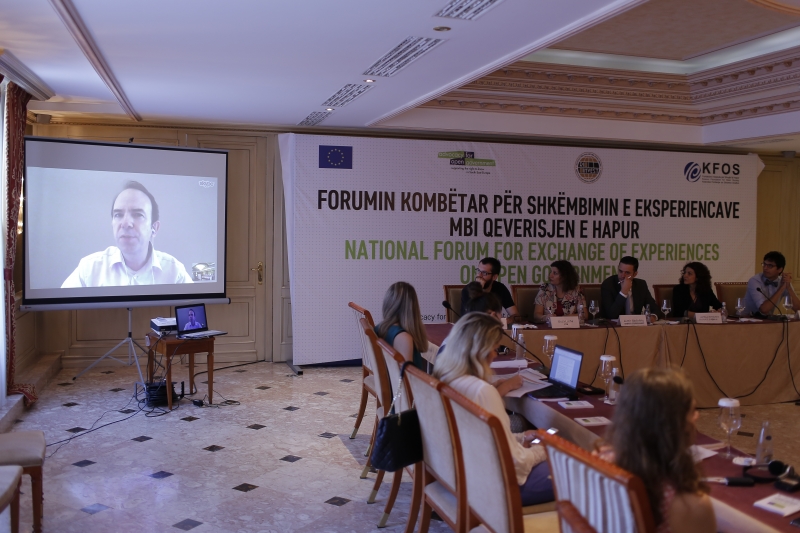 Artela Mitrushi, expert of Open Governance Partnership, declared that a dialogue between the government and the organizations of civil society is needed, and not only in the moment of drafting an action plan, but also in a continual way of implementing and monitoring. According to her, the total inclusion of the citizens is extremely important.

According to Georges Labreche, director of “Open Data Kosovo” civil society organizations and the government should focus in activities which have a real impact. Further, he added that civil society organizations are not opening their data, while they are requesting from the government to do that. On the other hand, the government continues to remain focused in fulfilling the formal requests of European union, but not those with real impact, such as for example the opening of a web page, but not also maintaining it.

Meanwhile, Hajrulla Ceku, from the organization “Ec Ma Ndryshe” presented the work on the transparency, which the organization “Ec Ma Ndryshe” has created with the aim of monitoring the seven big municipalities. According to him, within the index of transparency have been created 13 groups of indicators where the work is developed throughout the whole year, and where together with the municipalities, it has been worked in agreeing the methodology of conducting the research. 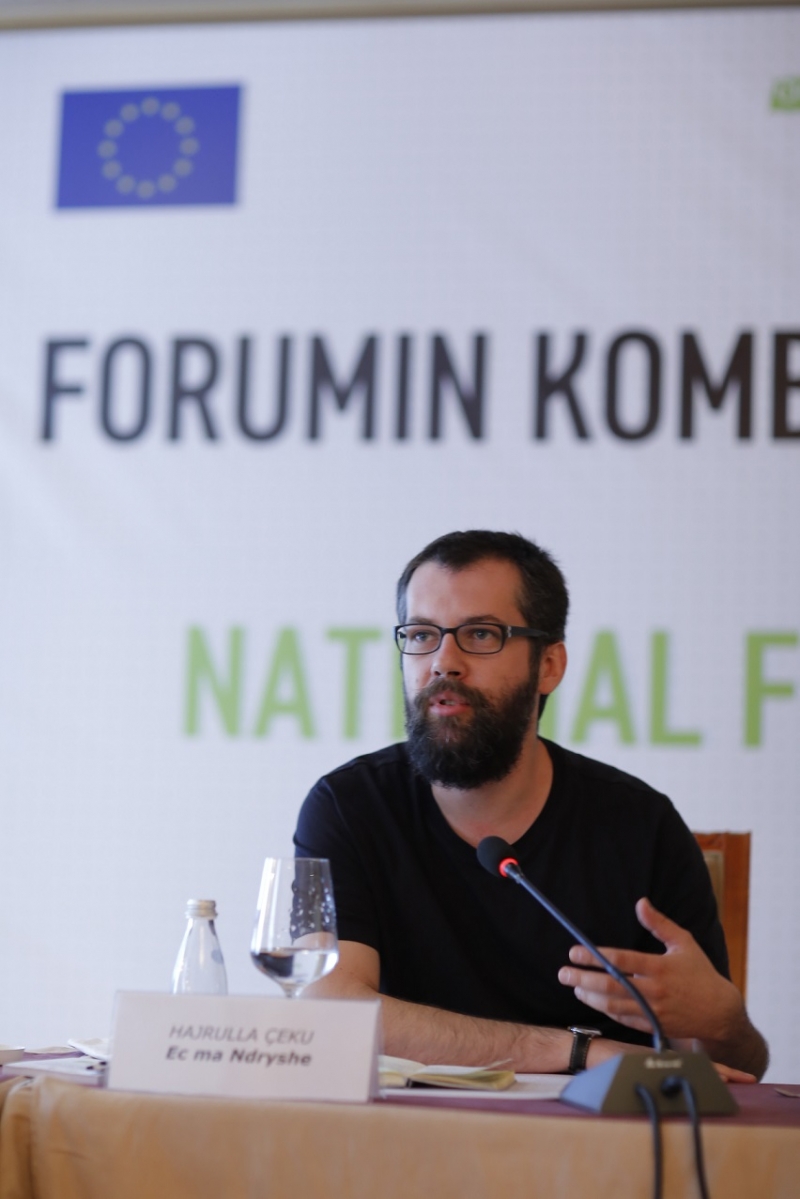 On the second part of the panel discussion, members of the government and governmental agencies from Kosova and Albania discussed on the priorities of open, transparent, and accountable governance. Jona Josifi, from the National Agency for Computer Security, from the Prime Minister of Albania’s Office, presented a presentation named: “The growth of Public Integrity”. Josifi, shared the experience of Albania’s government for open governance.

As a part of the second panel discussion, Sokol Havolli, chief of the Prime Minister’s Cabinet, declared that a challenge in maintaining the portal “Open Data” remains the update of the data. According to him, the responsibility falls also on other institutions like the central bank, ministry of finance, statistics agency and others. Havolli stated that the quality of the data when compared with other countries in the region, is quite high. 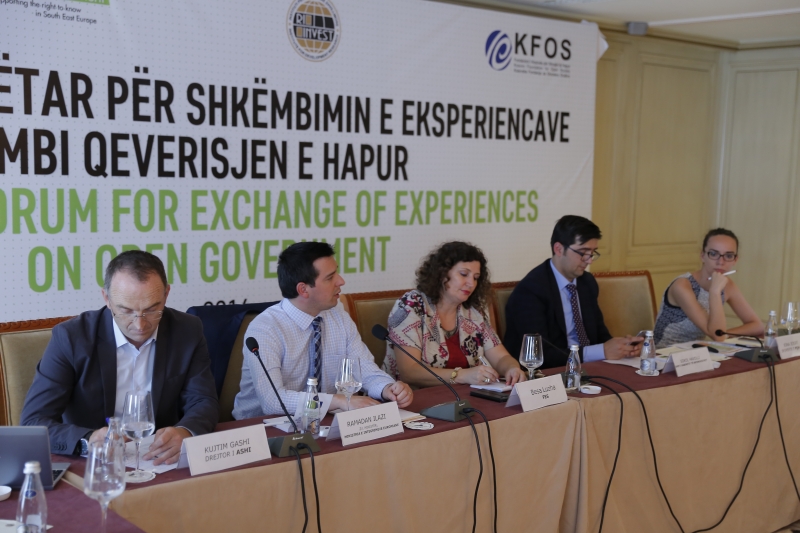 Panelists of the second part of discussion

Ramadan Ilazi, Deputy Minister of European Integration, discussed on the process through which Kosovo went through, which was required for membership in “Open Government Partnership”, and the barriers that they faced due to the country’s political status.

Kujtim Gashi, director of the Agency of Information, from the Ministry of Public Administration, declared that open data are one of the challenges which societies face, not only in our country. According to him, the opening of the data should not be an objective in itself, but a natural process. Further, he added that until now, there has been enough work on the opening of the data, and the field of electronic governance is the key in opening the data.

The project “Advocacy for Open Government” is a two year project, supported by the European Union, and led by PASOS network (Policy Association for an Open Society), which is being applied in six Western Balkan countries: Kosovo, Albania, Bosnia and Hercegovina, Montenegro, Macedonia and Serbia.